When you are unable to use either of your arms, it is the little things that haunt you. Kenneth Koster, M.D., a retired cardiothoracic surgeon, learned this during his recovery from a fall in which he sustained serious injury. “Simple activities assume gigantic proportion when you can’t move your arms. You ask yourself, ‘Is it worth the effort?’ Getting up out of a chair or trying to pick something up from the floor become monumental tasks.” Clearly, Dr. Koster is a man of great determination and self-discipline as is evidenced by his renowned medical career and multiple other interests of which he has been involved over the years. Upon retiring from a career in cardiothoracic surgery, he has had the good fortune to pursue his passion for painting. In fact, it was while leaving his art studio in Chicago that he fell, and in trying to catch himself, severely injured both of his upper extremities.

“I tripped and fell down a flight of stairs and ended up inverted on the floor. The early moments are a blur although I do remember making an assessment of what was working and what was not. I could move my right arm some, but the left arm was gone.” Through a series of events, Dr. Koster was evaluated and provided initial treatment by a specialist in orthopedic trauma in the Chicago area, but ultimately Dr. Koster decided to return to Jacksonville.

“My wife told me that I really needed to come home. I left Chicago not out of a lack of confidence in the people at Northwestern, but with a growing realization of how badly I was injured and the prospect of a long, long recovery.” He contacted Bruce Steinberg, M.D., specialist in upper extremities. “The fact that I knew Dr Steinberg's reputation made the decision to come home for treatment easy.” Dr. Koster continues to say that some physicians shy away from treating other doctors, especially very difficult cases. “I was a mess, but Dr. Steinberg did not blink. He was determined to do all that he could for me.” 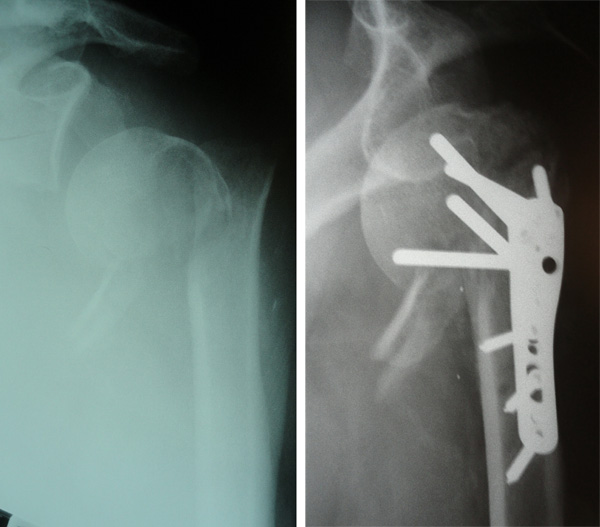 Through examination and testing, Dr. Steinberg diagnosed Dr. Koster with a displaced, comminuted proximal humerus fracture of his left upper extremity and a distal biceps rupture with retraction of his right upper extremity. The required surgical repair was somewhat complicated because a month had passed since the accident. After much discussion of options, Dr. Steinberg, with Dr. Steven Crenshaw, performed both a left side repair of the proximal humerus fracture and a right side distal biceps repair.

Dr. Koster shares that the period immediately following his surgery was especially difficult due to his need for total reliance on others. During this time, his wife cared for his every need. “It was a low point, and it certainly put many things in perspective.” He knew, however, that his recovery was a matter of several components coming together: expert surgical skill applied to extreme injury, time for healing, and then, when his body was ready, a rigorous course of physical therapy, of which he would need to totally commit. About five months after his surgery, Dr. Koster realized that certain motions of his left arm during therapy “hurt beyond all others.” Dr. Steinberg determined that further surgical repair was required and thus Dr. Koster underwent a left shoulder removal of some of the hardware installed during the initial surgery.

While his recovery has been long, Dr. Koster is mindful that due to the extent of his injuries, this is not surprising. He has dedicated himself to a regimen of therapy, with occupational JOI physical therapist, in particular Christian Prado (MOTR-L), and also at home, where he has created a circuit of stretching bands. The combination of activities has helped his range of motion and strength. Dr. Koster is happy to report that recently he has noted “a real turn for the better” in terms of regained strength in his arms. “While I certainly have not enjoyed this experience, I do appreciate what I learned on a personal level. After my fall, I realized fairly quickly that expert medical care would be essential. Dr. Steinberg is a perfectionist who insists on doing things correctly. This has certainly been validated by my experience.”